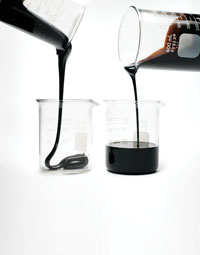 Asphalt, also known as bitumen is a sticky, black, highly viscous liquid or semi-solid form of petroleum. It may be found in natural deposits or may be a refined product, and is classed as a pitch. Before the 20th century, the term asphaltum was also used. The word is derived from the Ancient Greek ἄσφαλτος ásphaltos. The largest natural deposit of asphalt in the world, estimated to contain 10 million tons, is the Pitch Lake located in La Brea in southwest Trinidad (Antilles island located on the northeastern coast of Venezuela), within the Siparia Regional Corporation.
The primary use (70%) of asphalt is in road construction, where it is used as the glue or binder mixed with aggregate particles to create asphalt concrete. Its other main uses are for bituminous waterproofing products, including production of roofing felt and for sealing flat roofs. 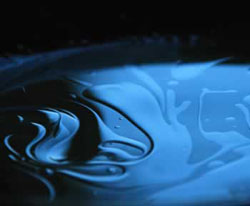 In material sciences and engineering, the terms “asphalt” and “bitumen” are often used interchangeably to mean both natural and manufactured forms of the substance, although there is regional variation as to which term is most common. Worldwide, geologists tend to favor the term “bitumen” for the naturally occurring material. For the manufactured material, which is a refined residue from the distillation process of selected crude oils, “bitumen” is the prevalent term in much of the world; however, in American English, “asphalt” is more commonly used. To help avoid confusion, the phrases “liquid asphalt”, “asphalt binder”, or “asphalt cement” are used in the U.S. Colloquially, various forms of asphalt are sometimes referred to as “tar”, as in the name of the La Brea Tar Pits, although tar is a different material.
Naturally occurring asphalt is sometimes specified by the term “crude bitumen”. Its viscosity is similar to that of cold molasses while the material obtained from the fractional distillation of crude oil boiling at 525 °C (977 °F) is sometimes referred to as “refined bitumen”. The Canadian province of Alberta has most of the world’s reserves of natural asphalt in the Athabasca oil sands, which cover 142,000 square kilometres (55,000 sq mi), an area larger than England.